Have you ever heard a horoscope referred to as a ‘personal database’? It is! Thanks to the brilliance of astrology software developers, astrologers no longer need to be mathematicians and astronomers to ‘cast a chart.’ Hear from professional software designer, developer, and Mountain Astrologer software-reviewer Hank Friedman about the history of creating charts, how it is done to day, and how it might be done in the future. Learn HOW an astrology chart is cast. More importantly, learn WHAT it represents!

Hank Friedman is a gifted psychic, astrologer and computer software specialist. He has an extensive background in science, psychology, spiritual studies, western and vedic astrology, and software design. He holds a BS in Psychology and numerous certifications in therapy. In 1973 his girlfriend asked him “What’s your sign?” and he set about to disprove astrology. After extensive testing he found himself stunned by its accuracy and began giving readings. In 1978 a grateful client bought him an Apple II computer and Hank began his journey as an astrology software developer. He helps companies debug programs and improve their software’s design and functionality.

According to historian Benson Bobrick, Astrology is “the origin of science itself.  From Astrology are derived astronomy, the calculation of time, mathematics, medicine, botany, mineralogy, and by way of alchemy modern chemistry.”

Join us, and our renowned guests Eric Francis of planetwaves.net and Christine Payne-Towler Tarot scholar, as we discover what a rich and colorful impact Astrology has made on history and the history of ideas. We will take you through its impressive 5000 year evolution.  Be surprised by who studied it, practiced it, paid for it, and ruled by its wisdom.

Have we got your attention? You are not alone. Between 30-40% of Americans (100,000,000 people) believe in this sacred metaphysical science and art.

Join us for a fresh and credible view on this much aligned subject that’s once again being taught in colleges & universities all over the world.

After a 10-year career as an investigative reporter writing for The Village Voice, Sierra magazine and elsewhere, Eric Francis Coppolino blazed into astrology with relentless passion and curiosity. He quickly became a beacon for readers around the world, making his first mark on astrology at the dawn of the Internet. Specializing in new planet discoveries such as Chiron and Eris, his work is considered some of the most innovative, accessible and humane astrology available today. He is the editor of PlanetWaves.net and host of PlanetWaves.FM, where be blends astrological discussion with personal growth and world affairs.

Christine Payne-Towler is an esoteric researcher and practitioner. She wrote the interpretive Tarot text for www.Tarot.com. Her first book The Underground Stream, Esoteric Tarot Revealed was released in 1999. Christine’s research articles and astrological analyses are on her blog site www.TarotArkLetters.com. She appeared in Secrets of the Occult, a 2007 documentary exploring issues raised in the popular Dan Brown novels and dedicated to the magicians of the Renaissance. In 2011 Christine and Michael Dowers released Tarot of the Holy Light, voted the 6th best deck at Aeclectic Tarot. Christine has two videos under the title AstroTheology: The Thin Spindle of Necessity to help modern occultists understand the ancient roots of the esoteric arts. Her latest books are Tarot of the Holy Light; A Continental Esoteric Tarot and Foundations of the Esoteric Tradition.

“Astrology is astronomy brought down to earth and applied to the affairs of men.” 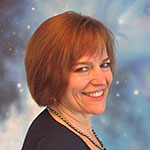 Join us for our first episode when we’ll introduce ourselves, our new astrology show, and discuss the Law of Attraction with guest Dr. Laurel Clark, Regional Director of the School of Metaphysics and author of The Law of Attraction: And Other Secrets of Visualization. We’ll ask Dr. Clark for her insights on how we attracted this radio show into our lives.

Hear about our attraction to astrology, our friendship as professional astrologers, and our desire to co-create this entertaining, innovative and informative radio talk show to promote the profession of astrology. We’ll explore Jung’s fascination with the unconscious mind by delving into dreams, visualization and, of course, the encoded symbolism in everyone’s astrological chart.

Come place your attention on your intention to compel the universe to support your dreams. Becoming the master of your own destiny is not magic.

Dr. Laurel Clark is a Regional Director for the School of Metaphysics, teacher since 1979, and a past president of the SOM. She dedicates her life to helping others live more divine-centered lives as a psi counselor, an ordained minister in the Interfaith Community of Metaphysics, and public speaker. The author of the book The Law of Attraction and Other Secrets of Visualization, Laurel has lectured nationwide on the topic. She is currently writing a book called Mind Magnetism: the Law of Abundance in Action, which includes the spiritual dimensions of visualization. An expert on dreams, Laurel is Vice President of the International Association for the Study of Dreams, and author of the book Intuitive Dreaming. Laurel teaches the secrets to understanding how visualization and intuition are partners that enable us to create our heart’s desires and fulfill our destiny.